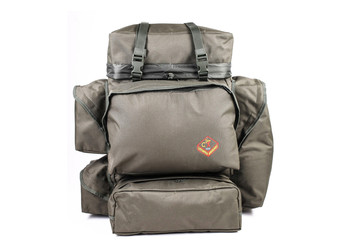 Most anglers are always trying to lighten up their load that they take on a session, but there are still anglers that like to take the proverbial “kitchen sink” with them. Most anglers will take an almost endless supply of bags with them on even a short overnighter so that they have everything to hand. Trying to balance multiple bags of different shapes and sizes on a barrow, can make the trip to the swim over rough terrain a perilous task, but Cotswold Aquarius have come up with a solution to this issue with their range of barrow sacks. Rather than take a look at the largest in the range, UKMA chose to put the smaller “Rhino” barrow sack through its paces and see if it could take what we thought would be everything that the angler would ever require on the bank.

The Rhino barrow sack may look like a large ruck sack, but there is more to the design than a first glance will give. On the reverse of the Rhino, the traditional double shoulder straps and waist strap can be found. These straps are seriously padded and wide enough not to dig in when the ruck sack is heavilly loaded. Even under serious loads, the stitching does not creak or stretch. The rear of the bag which fits to the back is padded to the normal Cotswold Aquarius standard and does take the strain out of the loading. Directly above the shoulder straps, a webbing handle has been fitted which allows the angler to move the bag around easily but is not designed to be used to lift a heavily loaded ruck sack. Not to say that it would not handle the weight, but as the handle is not padded it will dig into the hand.

The material used in the construction of the Rhino is the standard heavy duty material that Cotswold Aquarius are reknowned for. Each of the panels used to make up the Rhino fit together perfectly and when empty the Rhino stands square. The stitching together of the material is of the highest quality and will not let the angler down under the harshest of conditions.

The storage capacity of the Rhino is rated to 80 litres, which may not sound to be a huge amount, but with the design of the barrow sack, Cotswold Aquarius have created an almost Tardis-like piece of luggage. The Rhino has 5 padded external pockets; one large pocket on the front, a smaller pocket underneath, two small pockets on one side and a full size pocket on the right. The large pocket on the front of the Rhino has been designed to house a large Fox or Nash tackle box perfectly, but the fit is not tight so that removing or replacing the box is a struggle, yet remains secure and protected in transit. The front pocket is fitted with a double puller zip that runs along 3 sides. The zip itself is covered by a baffle flap that keeps rain out of the pocket. Directly underneath the large pocket, there is a smaller full width pocket that is large enough to hold at least 3 Korda Rig Safe’s or one of the Cotswold Aqaurius Spool Tubes. Again this pocket has the double puller zip and rain baffle flap.

Moving onto the side pockets, the two smaller pockets on one side are of the size that will hold items such as lead pouches or other items such as a radio, unhooking tools, etc that may be required quickly. The side pockets are fitted ith a single puller zip that runs again on 3 sides for ease of access. The de facto rain baffles are also present. On the opposite side, a full size pocket is fitted that is the perfect size for a large scales pouch or even two rod buzzer bars on 12″ banksticks with the buzzers fitted. Again the side pockets are all padded to protect the contents.

The main section of the barrow sack is where the Rhino comes into its own. The main zip that allows access to the main compartment is of the dual puller zip and on opening the top, you can see a removable waterproof liner. The liner is secured in place using velco and can be easily removed for cleaning purposes. The main compartment is cavernous enough to hold at least 15 kilos of boilies (should you wish to use this section for that purpose), or spare clothing, cooking equipment, camera’s, etc. The main compartment when empty, does not allow the Rhino to collapse by the clever use of a sewn-in reinforcement board on the back section. This board also stops the contents of the main compartment from digging into the back when being carried. The upper section that the zip runs around has a padded section that also runs on a dual puller zip along 3 sides. This section allows for other sundry items such as PVA tubes, headlamps, or anything else that you wish to store out of the way but still get to quickly without struggling. The upper compartment can also hold a large tackle box if required. When the main compartment is zipped up, there is a waterproof strip of material that has a drawstring which eliminates any possible ingress of rain. This baffle can be easily lifted up to unzip or zip up the compartment.

When the main compartment is zipped up, Cotswold Aquarius have fitted to webbing straps that clip to the main compartment which allows for items to be carried externally on top of the Rhino. These can be used for items such as buzzer bar pouches, sleping bags, unhooking mats, etc, leaving a hand free when being carried on the back.

Underneath the main compartment, where the lower front pocket is situated, there is an almost hidden lower compartment that alows for at least 3 Cotswold Aquarius Multi Pouches to be fitted inside perfectly. The base of the lower compartment has been fitted ith a heavy duty waterproof panel which ill also protect the main material from gravel or other hard areas of bank.

During the sessions that we have taken the Rhino Barrow Sack out on, we have been in awe of exactly what the bag can hold. On a recent session, one of the team removed everything that he took with him and it was almost like a mini tackle shop strewn over the grass. Even with this amount of gear, there was still room for more in some of the compartments! As we use barrows or can park behind our swims for a lot of our angling, the size of the Rhino does not stop us from moving swims if required, and in fact makes it easier as it is just one bag to load on to the barrow or back of the car. When on the barrow, it doesn’t matter if the Rhino is positioned upright or on its back, it does not move around even over the worst terrain.

The Rhino Barrow Sack has a RRP of £179.99, and given the quality of the material, workmanship and that the Rhino is made entirely in England, it is an absolute bargain. This ruck sack will be my bag of choice for the forseeable future. 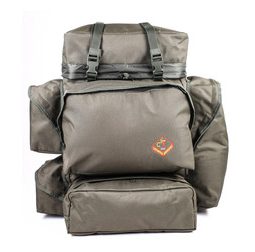 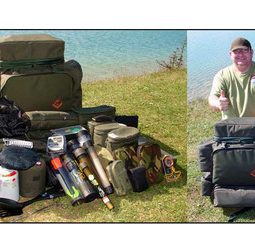 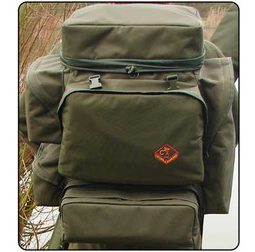